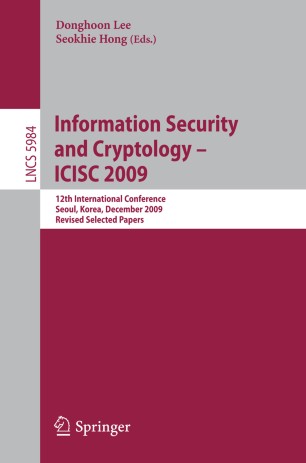 ICISC 2009, the 12th International Conference on Information Security and Cryptology, was held in Seoul, Korea, during December 2–4, 2009. It was - ganized by the Korea Institute of Information Security and Cryptology (KIISC) and the Ministry of Public Administration and Security (MOPAS). The aim of this conference was to provide a forum for the presentation of new results in research, development, and applications in the ?eld of information security and cryptology. It also served as a place for research information exchange. The conference received 88 submissions from 22 countries, covering all areas of inf- mation security and cryptology. The review and selection processes were carried out in two stages by the Program Committee (PC) comprising 57 prominent - searchers via online meetings. First, at least three PC members blind-reviewed each paper, and papers co-authored by the PC members were reviewed by at least ?ve PC members. Second, individual review reports were revealed to PC members, and detailed interactive discussion on each paper followed. Through this process,thePC?nally selected 25papers from15countries. The acceptance rate was 28. 4%. The authors of selected papers had a few weeks to prepare for their ?nal versions based on the comments received from more than 80 ext- nal reviewers. The conference featured one tutorial and one invited talk. The tutorial was given by Amit Sahai from the University of California and the talk ´ was given by Michel Abdalla from Ecole normale sup´ erieure.