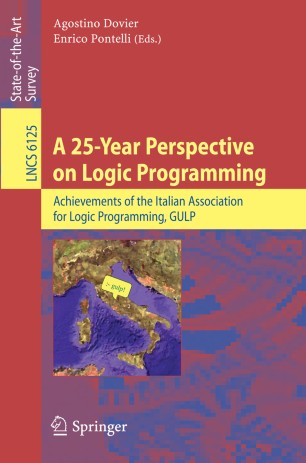 A 25-Year Perspective on Logic Programming

Achievements of the Italian Association for Logic Programming, GULP

This book celebratesthe 25th anniversaryof GULP—the Italian Associationfor LogicProgramming.Authored by Italian researchersat the leading edge of their ?elds, it presents an up-to-date survey of a broad collection of topics in logic programming, making it a useful reference for both researchers and students. During its 25-year existence, GULP has organised a wide range of national and international activities, including both conferences and summer schools. It has been especially active in supporting and encouraging young researchers, by providing scholarships for GULP events and awarding distinguished disser- tions. WeintheinternationallogicprogrammingcommunitylookuponGULPwith a combination of envy, admiration and gratitude. We are pleased to attend its conferences and summer schools, where we can learn about scienti?c advances, catch up with old friends and meet young students. It is an honour for me to acknowledge our appreciation to GULP for its outstanding contributions to our ?eld and to express our best wishes for its continuing prosperity in the future. March 2010 Robert Kowalski Imperial College London Preface On June 18, 1985, a group of pioneering researchers, including representatives from industry, national research labs, and academia, attended the constituent assembly of the Group of researchers and Users of Logic Programming (GULP) association. That was the starting point of a long adventure in science, that 1 we are still experiencing 25 years later. This volume celebrates this important event.