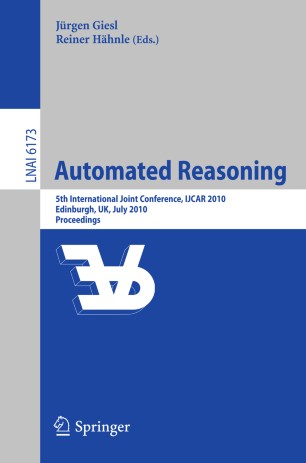 This volume contains the proceedings of the 5th International Joint Conference on Automated Reasoning (IJCAR 2010). IJCAR 2010 was held during July 16-19 as part of the 2010 Federated Logic Conference, hosted by the School of Informatics at the University ofEdinburgh,Scotland. Support by the conference sponsors – EPSRC, NSF, Microsoft Research, Association for Symbolic Logic, CADE Inc. , Google, Hewlett-Packard, Intel – is gratefully acknowledged. IJCARisthepremierinternationaljointconferenceonalltopicsinautomated reasoning, including foundations, implementations, and applications. Previous IJCAR conferences were held at Siena (Italy) in 2001, Cork (Ireland) in 2004, Seattle (USA) in 2006, and Sydney (Australia) in 2008. IJCAR comprises s- eral leading conferences and workshops. In 2010, IJCAR was the fusion of the following events: –CADE: International Conference on Automated Deduction –FroCoS: International Symposium on Frontiers of Combining Systems –FTP: International Workshop on First-Order Theorem Proving – TABLEAUX: InternationalConferenceonAutomatedReasoningwith- alytic Tableaux and Related Methods There were 89 submissions (63 regular papers and 26 system descriptions) of which 40 were accepted (28 regular papers and 12 system descriptions). Each submission was assigned to at least three Program Committee members, who carefully reviewed the papers, with the help of 92 external referees. Afterwards, the submissions were discussed by the ProgramCommittee during two weeks by means of Andrei Voronkov’s EasyChair system. We want to thank Andrei very much for providing his system, which was very helpful for the management of the submissions and reviews and for the discussion of the Program Committee.