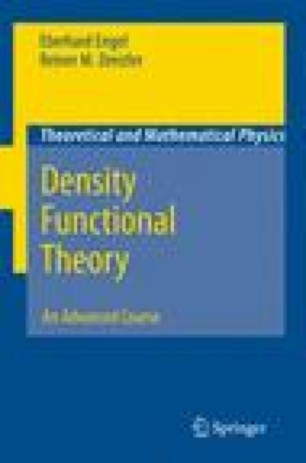 Density Functional Theory (DFT) has firmly established itself as the workhorse for the atomic-level simulation of condensed matter phases, pure or composite materials and quantum chemical systems. The present book is a rigorous and detailed introduction to the foundations up to and including such advanced topics as orbital-dependent functionals and both time-dependent and relativistic DFT. Given the many ramifications of contemporary DFT, this text concentrates on the self-contained presentation of the basics of the most widely used DFT variants. This implies a thorough discussion of the corresponding existence theorems and effective single particle equations, as well as of key approximations utilized in implementations. The formal results are complemented by selected quantitative results, which primarily aim at illustrating strengths and weaknesses of a particular approach or functional. DFT for superconducting or nuclear and hadronic systems are not addressed in this work. The structure and material contained in this book allow for a tutorial and modular self-study approach: the reader will find that all concepts of many-body theory which are indispensable for the discussion of DFT - such as the single-particle Green’s function or response functions - are introduced step by step, rather than just used. The same applies to some basic notions of solid state theory, as, for instance, the Fermi surface. Also, the language of second quantization is introduced systematically in an Appendix for readers without a formal theoretical physics background.