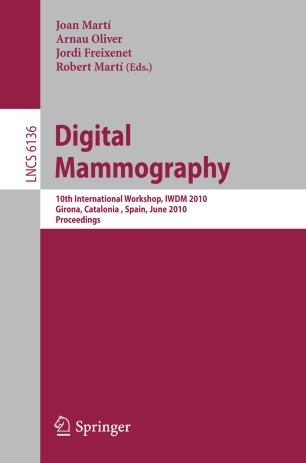 This volume of Springer’s Lecture Notes in Computer Science series comprises th the scienti?c proceedings of the 10 International Workshop on Digital Mammography (IWDM), which was held June 16–18, 2010 in Girona, Cata- nia. The IWDMmeetingstraditionallybringtogetheradiversesetofresearchers (physicists, mathematicians, computer scientists, engineers), clinicians (radi- ogists, surgeons) and representatives of industry, who are jointly committed to developing technology, not just for its own sake, but to support clinicians in the early detection and subsequent patient management of breast cancer. The IWDM conference series was initiated at a 1993 meeting of the SPIE Medical Imaging Symposium in San Jose, CA, with subsequent meetings hosted every two yearsbyresearchersaroundthe world. Former workshopswereheld in York, England (1994), Chicago, IL USA (1996), Nijmegen, The Netherlands (1998), Toronto, Canada (2000), Bremen, Germany (2002), Durham, NC, USA (2004), Manchester, UK (2006) and Tucson, AZ USA (2008). Each of these scienti?c events was combined with very successful and focused industrial and research exhibits, which demonstrated the milestones of digital mammography over the years. A total number of 141 paper submissions from 21 countries were received. Each of these four-page abstract submissions was reviewed in a blind process by at least two members of the Scienti?c Committee, which led to a ?nal selection of 46 oral presentations and 57 posters during the two and one-half days of scienti?c sessions.