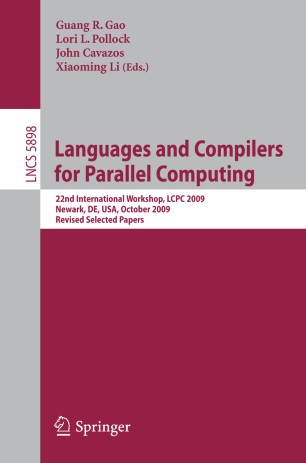 LCPC: International Workshop on Languages and Compilers for Parallel Computing

Languages and Compilers for Parallel Computing

Itisourpleasuretopresentthepapersacceptedforthe22ndInternationalWo- shop on Languages and Compilers for Parallel Computing held during October 8–10 2009 in Newark Delaware, USA. Since 1986, LCPC has became a valuable venueforresearchersto reportonworkinthegeneralareaofparallelcomputing, high-performance computer architecture and compilers. LCPC 2009 continued this tradition and in particular extended the area of interest to new parallel computing accelerators such as the IBM Cell Processor and Graphic Processing Unit (GPU). This year we received 52 submissions from 15 countries. Each submission receivedatleastthreereviewsandmosthadfour.ThePCalsosoughtadditional externalreviewsforcontentiouspapers.ThePCheldanall-dayphoneconference on August 24 to discuss the papers. PC members who had a con?ict of interest were asked to leave the call temporarily when the corresponding papers were discussed. From the 52 submissions, the PC selected 25 full papers and 5 short paperstobeincludedintheworkshopproceeding,representinga58%acceptance rate. We were fortunate to have three keynote speeches, a panel discussion and a tutorial in this year’s workshop. First, Thomas Sterling, Professor of Computer Science at Louisiana State University, gave a keynote talk titled “HPC in Phase Change: Towards a New Parallel Execution Model.” Sterling argued that a new multi-dimensional research thrust was required to realize the design goals with regard to power, complexity, clock rate and reliability in the new parallel c- puter systems.ParalleX,anexploratoryexecutionmodeldevelopedbySterling’s group was introduced to guide the co-design of new architectures, programming methods and system software.