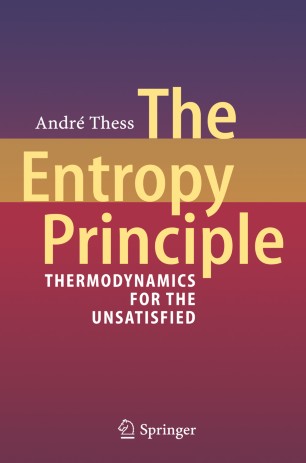 Thermodynamics for the Unsatisfied

Entropy – the key concept of thermodynamics, clearly explained and carefully illustrated. This book presents an accurate definition of entropy in classical thermodynamics which does not “put the cart before the horse” and is suitable for basic and advanced university courses in thermodynamics. Entropy is the most important and at the same time the most difficult term of thermodynamics to understand. Many students are discontent with its classical definition since it is either based on “temperature” and “heat” which both cannot be accurately defined without entropy, or since it includes concepts such as “molecular disorder” which does not fit in a macroscopic theory. The physicists Elliott Lieb and Jakob Yngvason have recently developed a new formulation of thermodynamics which is free of these problems. The Lieb-Yngvason formulation of classical thermodynamics is based on the concept of adiabatic accessibility and culminates in the entropy principle. The entropy principle represents the accurate mathematical formulation of the second law of thermodynamics. Temperature becomes a derived quantity whereas ”heat” is no longer needed. This book makes the Lieb-Yngvason theory accessible to students. The presentation is supplemented by seven illustrative examples which explain the application of entropy and the entropy principle in practical problems in science and engineering.