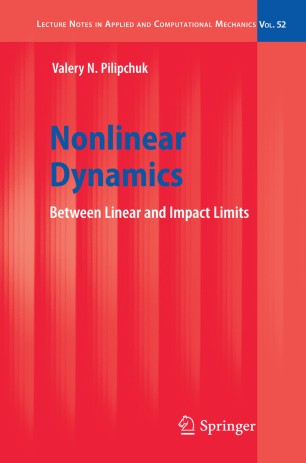 Between Linear and Impact Limits

Nonlinear Dynamics represents a wide interdisciplinary area of research dealing with a variety of “unusual” physical phenomena by means of nonlinear differential equations, discrete mappings, and related mathematical algorithms. However, with no real substitute for the linear superposition principle, the methods of Nonlinear Dynamics appeared to be very diverse, individual and technically complicated. This book makes an attempt to find a common ground for nonlinear dynamic analyses based on the existence of strongly nonlinear but quite simple counterparts to the linear models and tools. It is shown that, since the subgroup of rotations, harmonic oscillators, and the conventional complex analysis generate linear and weakly nonlinear approaches, then translations and reflections, impact oscillators, and hyperbolic (Clifford’s) algebras must give rise to some “quasi impact” methodology. Such strongly nonlinear methods are developed in several chapters of this book based on the idea of non-smooth time substitutions. Although most of the illustrations are based on mechanical oscillators, the area of applications may include also electric, electro-mechanical, electrochemical and other physical models generating strongly anharmonic temporal signals or spatial distributions. Possible applications to periodic elastic structures with non-smooth or discontinuous characteristics are outlined in the final chapter of the book.