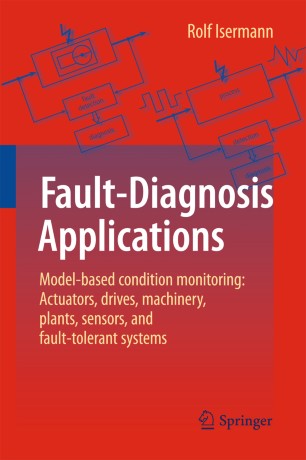 This book is a sequel of the book “Fault-Diagnosis Systems” published in 2006, where the basic methods were described. After a short introduction into fault-detection and fault-diagnosis methods the book shows how these methods can be applied for a selection of 20 real technical components and processes as examples, such as:

The book describes why and how the various signal-model-based and process-model-based methods were applied and which experimental results could be achieved. In several cases a combination of different methods was most successful.

The book is dedicated to graduate students of electrical, mechanical, chemical engineering and computer science and for engineers.

Rolf Isermann Rolf Isermann studied Mechanical Engineering and obtained the Dr.-Ing. degree in 1965 from the University of Stuttgart. In 1968 he became "Privatdozent" for Automatic Control and since 1972 Professor in Control Engineering at the University of Stuttgart. From 1977-2006 he was Professor for Control Systems and Process Automation at the Institute of Automatic Control of the Darmstadt University of Technology. Since 2006 he is Professor emeritus and is head of the Research Group of Control Systems and Process Automation. R. Isermann received the Dr. h.c. (honoris causa) from L'Université Libre de Bruxelles and from the Polytechnic University in Bucharest. In 1996 he was awarded the “VDE-Ehrenring”, and in 2007 the “VDI-Ehrenmitglied”. The MIT Technology Review Magazine awarded him in 2003 to the Top Ten representatives of emerging Technologies for the field of Mechatronics. R. Isermann has published books on Modeling of Technical Processes, Process Identification, Digital Control Systems, Adaptive Control Systems, Mechatronic Systems, Fault Diagnosis Systems, Engine Control and Vehicle Drive Dynamics Control. Current research concentrates on the fields of identification and digital control of nonlinear systems, intelligent control and model-based methods of process fault diagnosis with applications to servo systems, fault-tolerant systems, combustion engines, automobiles and mechatronic systems. The research group on combustion engines works on multivariable engine modeling, HiL-simulation, combustion pressure control and fault diagnosis of both, CR-Diesel engines and FSI-gasoline engines. In the vehicle dynamics group present topics are parameter estimation for drive dynamics control, fault detection of sensors, suspensions, tires and brake systems and the development of collision avoidance systems with surrounding sensing and active braking and steering. The first books on system identification were published in German and date back to 1971, 1974, 1988, and 1992. Since 1975, R. Isermann held several chair positions of IFAC-Technical Committees (International Federation of Automatic Control). In 1996, he was elected as Vice-President of IFAC until 2002. From 2002 to 2008, he was member of the IFAC-Council. R. Isermann organized several national and international conferences like the 5th IFAC Symposium on Identification in Darmstadt in 1979, the 10th IFAC-World-Congress in Munich 1987, the 1st IFAC-Symposium SAFEPROCESS, Baden-Baden, 1991 and the 1st IFAC-Conference on Mechatronic Systems, Darmstadt, 2000. He also organized the biannual VDI/VDE-Conference AUTOREG (control of vehicles and power trains) from 2002 to 2008.