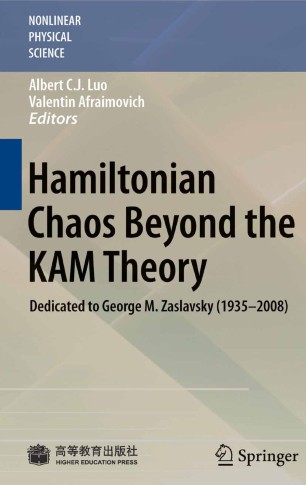 Hamiltonian Chaos Beyond the KAM Theory

“Hamiltonian Chaos Beyond the KAM Theory: Dedicated to George M. Zaslavsky (1935—2008)” covers the recent developments and advances in the theory and application of Hamiltonian chaos in nonlinear Hamiltonian systems. The book is dedicated to Dr. George Zaslavsky, who was one of three founders of the theory of Hamiltonian chaos. Each chapter in this book was written by well-established scientists in the field of nonlinear Hamiltonian systems. The development presented in this book goes beyond the KAM theory, and the onset and disappearance of chaos in the stochastic and resonant layers of nonlinear Hamiltonian systems are predicted analytically, instead of qualitatively. The book is intended for researchers in the field of nonlinear dynamics in mathematics, physics and engineering. Dr. Albert C.J. Luo is a Professor at Southern Illinois University Edwardsville, USA. Dr. Valentin Afraimovich is a Professor at San Luis Potosi University, Mexico.