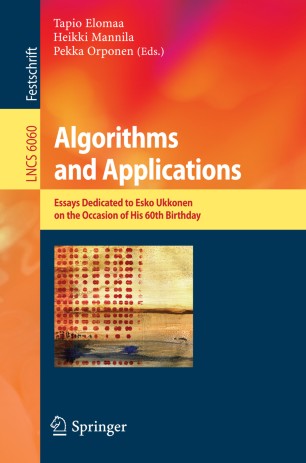 For many years Esko Ukkonen has played a major role in the advancement of computer science in Finland. He was the key person in the development of the school of algorithmic research and has contributed considerably to post-graduate education in his country. Esko Ukkonen has over the years worked within many areas of computer science, including numerical methods, complexity theory, theoretical aspects of compiler construction, and logic programming. However, the main focus of his research has been on algorithms and their applications. This Festschrift volume, published to honor Esko Ukkonen on his 60th birthday, includes 18 refereed contributions by his former PhD students and colleagues, with whom he has cooperated closely during the course of his career. The Festschrift was presented to Esko during a festive symposium organized at the University of Helsinki to celebrate his birthday. The essays primarily present research on computational pattern matching and string algorithms, two areas that have benefited significantly from the work of Esko Ukonen.