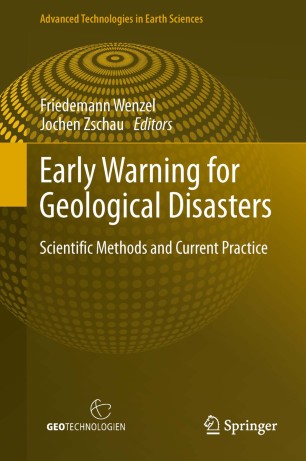 The past years have seen new technologies that could be utilized for early warning and real-time loss estimation. They include self-organizing sensor networks, new satellite imagery with high resolution, multi-sensor observational capacities, and crowd sourcing. From this and improved physical models, data processing and communication methodologies a significant step towards better early warning technologies has been achieved by research.

At the same time, early warning systems became part of the disaster management practice for instance in Japan and Indonesia. This book marks the important point where:

At this critical point in development of early warning for geological disasters it is timely to provide a volume that documents the state-of-the-art, provides an overview on recent developments and serves as knowledge resource for researcher and practitioners.

Friedemann Wenzel is a professor at Karlsruhe University, head of the Geophysical Institute and the Center for Disaster Mangement and Risk Reduction Technology (CEDIM) and is a founding member of EMI and served on its Board ever since. He is a member of several professional societies (EERI, AGU, SSA), of the Heidelberg Academy of Science and Humanities, and of the German Committee for Disaster Reduction and served as chairman of its Scientific Board between 2000 and 2004. Scientific interests include earthquake physics, engineering seismology, geological hazards, and risk mitigation in megacities.

Jochen Zschau is a professor at the University of Potsdam and director of the Department Physics of the Earth at the Helmholtz Centre Potsdam, German Research Centre for Geosciences (GFZ ). He is president of the European Seismological Commission, one of the leaders of the Indonesian-German Tsunami Early Warning System being set up in the Indian Ocean and coordinator of the EC SAFER project on seismic early warning. His scientific focus is on earthquake and volcanoes research.