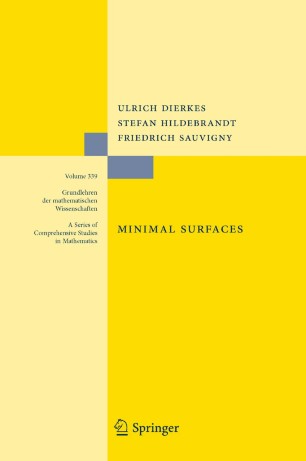 Minimal Surfaces is the first volume of a three volume treatise on minimal surfaces (Grundlehren Nr. 339-341). Each volume can be read and studied independently of the others. The central theme is boundary value problems for minimal surfaces. The treatise is a substantially revised and extended version of the monograph Minimal Surfaces I, II (Grundlehren Nr. 295 & 296). The first volume begins with an exposition of basic ideas of the theory of surfaces in three-dimensional Euclidean space, followed by an introduction of minimal surfaces as stationary points of area, or equivalently, as surfaces of zero mean curvature. The final definition of a minimal surface is that of a nonconstant harmonic mapping X: \Omega\to\R^3 which is conformally parametrized on \Omega\subset\R^2 and may have branch points. Thereafter the classical theory of minimal surfaces is surveyed, comprising many examples, a treatment of Björling´s initial value problem, reflection principles, a formula of the second variation of area, the theorems of Bernstein, Heinz, Osserman, and Fujimoto. The second part of this volume begins with a survey of Plateau´s problem and of some of its modifications. One of the main features is a new, completely elementary proof of the fact that area A and Dirichlet integral D have the same infimum in the class C(G) of admissible surfaces spanning a prescribed contour G. This leads to a new, simplified solution of the simultaneous problem of minimizing A and D in C(G), as well as to new proofs of the mapping theorems of Riemann and Korn-Lichtenstein, and to a new solution of the simultaneous Douglas problem for A and D where G consists of several closed components. Then basic facts of stable minimal surfaces are derived; this is done in the context of stable H-surfaces (i.e. of stable surfaces of prescribed mean curvature H), especially of cmc-surfaces (H = const), and leads to curvature estimates for stable, immersed cmc-surfaces and to Nitsche´s uniqueness theorem and Tomi´s finiteness result. In addition, a theory of unstable solutions of Plateau´s problems is developed which is based on Courant´s mountain pass lemma. Furthermore, Dirichlet´s problem for nonparametric H-surfaces is solved, using the solution of Plateau´s problem for H-surfaces and the pertinent estimates.