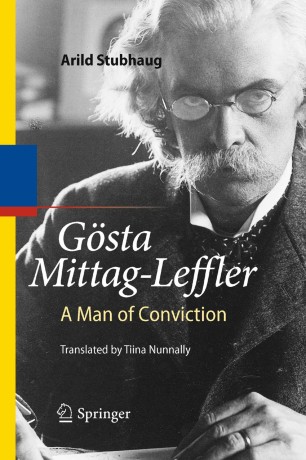 A Man of Conviction

Gösta Mittag-Leffler (1846–1927) played a significant role on the world stage as both a scientist and entrepreneur. Regarded as the father of Swedish mathematics, his influence extended far beyond his chosen field because of his extensive network of international contacts in science, business, and the arts. His social and professional circles included such luminaries as Selma Lagerlöf, Albert Einstein, Sonya Kovalevsky, Alfred Nobel, Karl Weierstrass, Henri Poincaré, and Marie Curie. (He was instrumental in seeing to it that the latter was awarded the Nobel Prize, not once but twice.) One of Mittag-Leffler’s major accomplishments was the founding of the journal Acta Mathematica in 1882. Today the journal is still published by Institut Mittag-Leffler and Sweden’s Royal Academy of Sciences, and it continues to be one of the most prestigious journals in mathematics. Arild Stubhaug’s research for this monumental biography of the Swedish mathematician relied on a wealth of primary and secondary resources, including more than 30000 letters that are part of the Mittag-Leffler archives. Written in a lucid and compelling manner, the biography contains many hitherto unknown facts about Mittag-Leffler’s personal life and professional endeavors. It will be of great interest to both mathematicians and general readers interested in science and culture.