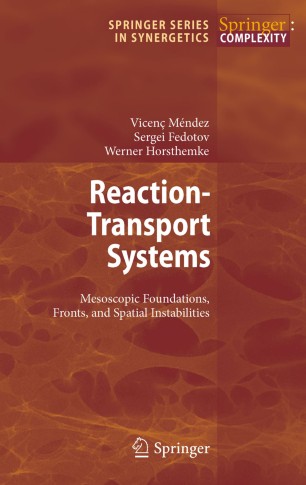 Part of the Springer Series in Synergetics book series (SSSYN)

This book is an introduction to the dynamics of reaction-diffusion systems, with a focus on fronts and stationary spatial patterns. Emphasis is on systems that are non-standard in the sense that either the transport is not simply classical diffusion (Brownian motion) or the system is not homogeneous. A important feature is the derivation of the basic phenomenological equations from the mesoscopic system properties.

Topics addressed include transport with inertia, described by persistent random walks and hyperbolic reaction-transport equations and transport by anomalous diffusion, in particular subdiffusion, where the mean square displacement grows sublinearly with time. In particular reaction-diffusion systems are studied where the medium is in turn either spatially inhomogeneous, compositionally heterogeneous or spatially discrete.

Applications span a vast range of interdisciplinary fields and the systems considered can be as different as human or animal groups migrating under external influences, population ecology and evolution, complex chemical reactions, or networks of biological cells. Several chapters treat these applications in detail.