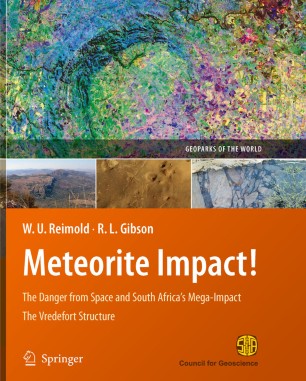 When geologists first wandered the spectacular ring of hills straddling the Vaal River north of Vredefort nearly 150 years ago, they immediately recognised that the unusually shattered and uptilted rocks bore witness to an exceptionally violent event in the distant past. However, it took more than a century of painstaking work before the accumulated evidence revealed the cause — the impact with Earth of a meteorite, the size of a mountain, about 2 020 million years ago. This book presents an opportunity to travel back in time to this remarkable event — arguably the single greatest geological catastrophe yet uncovered on our planet. It presents an easy to read account of the ten minutes that, quite literally, shook the world. Readers are taken both to the farthest reaches of our Solar System and back to its beginnings in a search for the source of meteorites. The book shows how the immense violence of the event and aeons of slow erosion have combined to provide us with a unique window onto the early history of planet Earth and into the deep levels of its interior. It goes on to show how the lessons learned from the rocks around Vredefort are being used throughout the world to teach a new generation of scientists of the reality, and danger, of similar events in the future. Finally, this book reviews more than 200 000 years of human habitation in this area of exceptional natural beauty and biodiversity. This history starts with the early San hunters, whose graceful art survives today on rocks formed during the impact event. The arrivals and settlements of Sotho, Tswana, Afrikaner and British settlers are discussed, including the landmark wars that affected the region over the last three centuries. This book documents the rich geological, archaeological, cultural and botanical heritage presented by the Vredefort region in an easily digestible manner, opening up the information to non- geoscientists. It concludes with a guide to key sites that highlight the heritage of this area, which was proclaimed a World Heritage Site in July 2005.