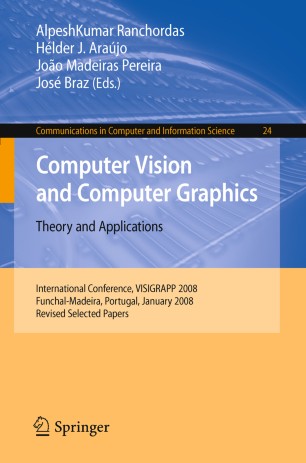 Part of the Communications in Computer and Information Science book series (CCIS, volume 24)

INSTICC organized the third edition of VISIGRAPP that took place in Funchal- Madeira, Portugal in January 2008 after successful previous editions. This book - cludes selected papers from VISIGRAPP 2008, the Joint Conference on Computer Vision Theory and Applications (VISAPP) and Computer Graphics Theory and - plications (GRAPP). The conference was intended to stimulate the exchange of ideas on the topics of c- puter vision and computer graphics. We received a high number of paper submissions: 374 in total for both conferences. We had contributions from more than 50 countries in all continents. This confirms the success and global dimension of these jointly organized conferences. After a rigorous double-blind evaluation method, 78 submissions were accepted as full papers. From those, 20 were selected for this book. To ensure the sci- tific quality of the contributions, these were selected from the ones that were evaluated with the highest scores by the VISIGRAPP Program Committee Members and then they were extended and revised by the authors. Special thanks go to all contributors and re- rees, without whom this book would not have been possible. VISIGRAPP 2008 also featured the comments of keynote speakers, in alphabetical order, Adrian Hilton (University of Surrey, UK), Geneviève Lucet (Computer S- vices for Research at the UNAM, Mexico), Peter Sturm (INRIA Rhône-Alpes, France) and Sharathchandra Pankanti (IBM - Exploratory Computer Vision Group, USA), who are internationally recognized researchers. The presentations represented an - portant contribution to the overall quality of the conference.