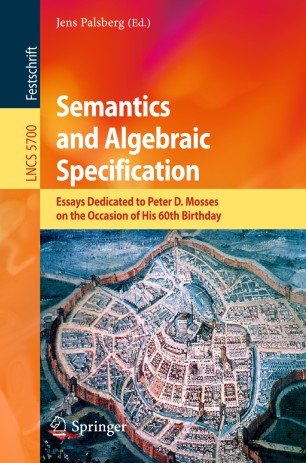 Essays Dedicated to Peter D. Mosses on the Occasion of His 60th Birthday

This Festschrift volume, published to honor Peter D. Mosses on the occasion of his 60th birthday, includes 17 invited chapters by many of Peter's coauthors, collaborators, close colleagues, and former students.

Peter D. Mosses is known for his many contributions in the area of formal program semantics. In particular he developed action semantics, a combination of denotational, operational and algebraic semantics.

The presentations - given on a symposium in his honor in Udine, Italy, on September 10, 2009 - were on subjects related to Peter's many technical contributions and they were a tribute to his lasting impact on the field. Topics addressed by the papers are action semantics, security policy design, colored petri nets, order-sorted parameterization and induction, object-oriented action semantics, structural operational semantics, model transformations, the scheme programming language, type checking, action algebras, and denotational semantics.