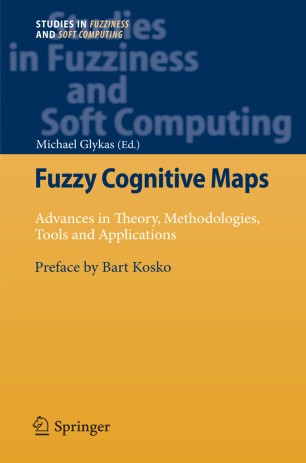 Part of the Studies in Fuzziness and Soft Computing book series (STUDFUZZ, volume 247)

The theory of cognitive maps was developed in 1976. Its main aim was the representation of (causal) relationships among “concepts” also known as “factors” or “nodes”. Concepts could be assigned values. Causal relationships between two concepts could be of three types: positive, negative or neutral. Increase in the value of a concept would yield a corresponding positive or negative increase at the concepts connected to it via relationships. In 1986 Bart Kosko introduced the notion of fuzziness to cognitive maps and created the theory of Fuzzy Cognitive Maps (FCMs). The relationship between two concepts in (FCMs) can take a value in the interval [-1,1]. This relationship value is called “weight”. For the last twenty years extensive research in the theory of FCMs has been performed that provided major improvements and enhancements in its theoretical underpinning. New methodologies and approaches have been developed. FCMs have also been applied to many different sectors. New software tools have been developed that automate FCM creation and management. The aim of this book is to present recent advances and state of the art in FCM theory, methodologies, applications and tools that exist to date scattered in journal papers, in a concrete and integrated manner.