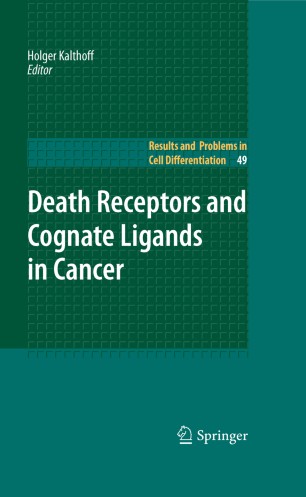 Part of the Results and Problems in Cell Differentiation book series (RESULTS, volume 49)

Death receptors play a central role in directing apoptosis in mammalian cells. This process of active cell death is important for a number of biological processes, e.g. for the regulation of the immune system. Death receptors are cell surface receptors that transmit apoptotic signals initiated by corresponding death ligands. Many complex signaling pathways are activated and apoptosis is the final result of a complex biochemical cascade of events.

Besides their role in the induction of cell death, evidence now exists that death receptors are able to activate several non-apoptotic signaling pathways which, depending on cellular context, may lead to apoptosis resistance, secretion of pro-inflammatory proteins, proliferation and invasive growth of cancer cells.