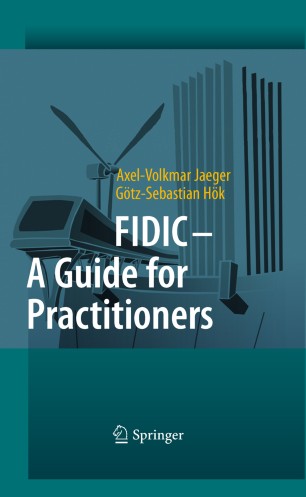 FIDIC - A Guide for Practitioners

In 1999, a suite of three new conditions of contract was published by FIDIC, following the basic structure and wording harmonised and updated around the previous FIDIC Design-Build and Turnkey Contract (the 1992 ‘‘Orange Book’’). These conditions, known as the ‘‘FIDIC rainbow, were the Conditions of C- tract for: l Construction, the so-called Red Book, for works designed by the Employer l Plant and Design-Build, the so-called Yellow Book, for works designed by the Contractor l EPC/Turnkey Projects, the so-called Silver Book, for works designed by the Contractor The ?rst is intended for construction works where the Employer is responsible for the design, as for per the previous so-called Red Book 4th Edition (1987), with an important role for the Engineer. The other two conditions of contract are intended for situations when the Contractor is responsible for the design. The Plant and Design-Build Contract has the traditional Engineer while the EPC/Turnkey Contract has a two-party arran- ment, generally with an Employer’s Representative as one of the parties.

is a lawyer, arbitrator, adjudicator, lecturer at the University of Applied Science in Berlin and a senior and partner at the law office, Dr. Hök, Stieglmeier & Kollegen, which has its seat in Berlin. His area of practise includes international construction contract law, international public procurement and trans-border real estate law. He has specialised in these areas of law since becoming a lawyer in 1991. As such, he has a great deal of experience in advising developers, contractors, employers, consulting engineers and architects. He also acts as a mediator, adjudicator and arbitrator at the international level. He is the author of a considerable number of papers and articles on topics in the field of contract administration and has also published several books in the fields of international contract law and international dispute resolution. His work, the Handbuch des internationalen und ausländischen Baurechts is widely considered the leading book in international construction in German. He has also translated the FIDIC Red, Yellow and Silver Books into German and French. He has been an accredited FIDIC trainer since 2007, and was a friendly reviewer of the FIDIC Gold Book.

is a consulting engineer  for mechanical services and former partner at Schmidt Reuter Partner, Cologne. His area of practise includes the design, procurement and administration of inter-national construction projects worldwide. He has specialised in these areas of practise since becoming a consulting engineer in 1970. Accordingly, he has considerable experience in the management of major international construction projects. He is also the current chairman of the FIDIC Contracts Committee and past Executive Committee Member. He served as member of various FIDIC task groups for the drafts of the FIDIC Yellow and Orange Books, the 1999 FIDIC Rainbow Edition, the White Book and the FIDIC Gold Book. He has been a certified FIDIC trainer since 2001, and received the Louis Prangey Award in 2007.

Both authors are responsible for the German FIDIC training at VBI (German Association of Consulting Engineers) and are members of the board for the assessment of German speaking adjudicators.

International construction is an increasingly crucial factor in international business. For over 50 years the International Federation of Consulting Engineers (FIDIC), founded in 1913, has acted to support the international construction business. FIDIC contracts are used worldwide and recommended by international organisations such as the World Bank group and the International Financing Institutes, they are equally widley used by civil law and by common law practitioners. Against this background the book provides detailed advice and explanations with regard to the use of FIDIC contracts, especially outside of common law countries and finding a balance between both legal systems, and promotes a better understanding of the issues at stake.

From the reviews: “Book is written by an engineer and a lawyer. … The Jaeger / Hok work does refer to awards. … provides wide-ranging references not only to decisions of UK courts but also to sources in other jurisdictions. It therefore provides a real service in alerting readers to the need to bear in mind when specialist legal advice may be needed. … useful flow charts to assist the understanding of the operation of the FIDIC forms. … work provides rather more general guidance on legal aspects.” (Humphrey Lloyd, The International Construction Law Review, 2010)
Buy options