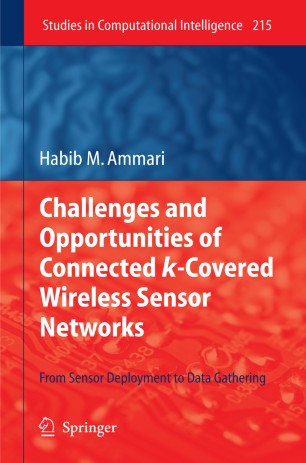 From Sensor Deployment to Data Gathering

Wireless sensor networks have received significant attention because of their important role and many conveniences in our lives. Indeed, the recent and fast advances in inexpensive sensor technology and wireless communications has made the design and development of large-scale wireless sensor networks cost-effective and appealing to a wide range of mission-critical situations, including civilian, natural, industrial, and military applications, such as health and environmental monitoring, seism monitoring,  industrial process automation, and battlefields surveillance, respectively. A wireless sensor network consists of a large number of tiny, low-powered devices, called sensors, which are randomly or deterministically deployed in a field of interest while collaborating and coordinating for the successful accomplishment of their mission. These sensors suffer from very scarce resources and capabilities, such as bandwidth, storage, CPU, battery power (or energy), sensing, and communication, to name a few, with energy being the most critical one. The major challenge in the design process of this type of network is mainly due to the limited capabilities of the sensors, and particularly, their energy, which makes them unreliable.

This book aims to develop a reader’s thorough understanding of the opportunities and challenges of k-covered wireless sensor networks, where each point in a deployment field is covered (or sensed) by at least k sensors. Following René Descartes’ most elegant methodology of dividing each difficulty into as many parts as might be possible and necessary to best solve it (Discours de la Method, 1637), this book presents a variety of theoretical studies based on percolation theory and computational geometry, as well as protocols that lead to the design of a unified framework, where connected k-coverage, sensor scheduling, and data routing and dissemination are jointly considered.

“The book presents the up-to-date state of the art in the field of wireless sensor networks (WSNs), especially the connectivity and coverage issues. … The book is well written, the terms are introduced in the proper order. The discussion is carried on starting with simple environments and then extended to more complex ones. All the material is presented in a clear manner.” (Jozef Woźniak, Zentralblatt MATH, Vol. 1187, 2010)
Buy options