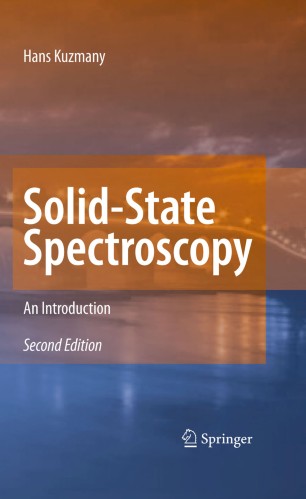 Spectroscopic methods have opened up a new horizon in our knowledge of solid-state materials. Numerous techniques using electromagnetic radiation or charged and neutral particles have been invented and worked out to a high level in order to provide more detailed information on the solids. The text presented here is an updated description of such methods as they were originally presented in the first edition. It covers linear response of solids to electromagnetic radiation in a frequency range extending from megahertz or gigahertz as used in spin resonance spectroscopy, to infrared spectroscopy and various forms of spectroscopy in the visible and near visible spectral range. It extends to spectroscopy in the UV and x-ray spectral range and eventually several spectroscopic methods are addressed in the frequency range of g radiation. Likewise linear response to irradiation with particles such as electrons, positrons, muons, neutrons, and atoms is discussed. Instrumental and technical background is provided as well as application to the analysis of the solid state.

New developments especially addressed in this second edition cover the exciting new field of mesoscopic and nanoscopic solids using light scattering from small particles, single electron (addition) spectroscopy, and quantization in magnetic fields. Likewise, the development and application of synchrotron radiation has encountered a dramatic progress particularly in the field of high resolution and angular resolved photoelectron spectroscopy. Free electron lasers from undulators in linear accelerators are becoming available with dramatic enhancement in brightness and provide a fourth generation of synchrotron light sources. The better understanding and the possibilities to manipulate spin states as it happens in spintronic research stimulated sophisticated technologies in electron and nuclear spin resonance which are also covered in the new edition. Breakthrough developments were obtained in the field of light emission from semiconductor devices and for femtosecond spectroscopy. In addition in almost all other spectroscopic techniques progress was obtained in the last years and is reviewed in the text. Thus the book may be considered as a state-of-the-art introductory text in solid-state spectroscopy.

Each chapter includes problems. The concept of this textbook is designed for graduate students and young professors who want to set up lectures or courses in solid-state spectroscopy.