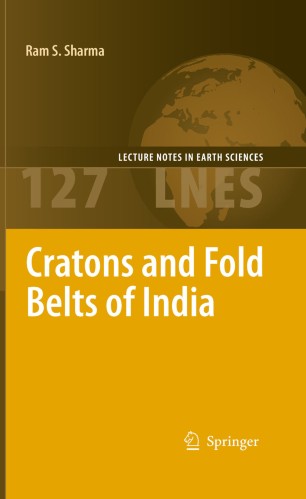 Cratons and Fold Belts of India

Cratons and Fold Belts of India, is a unique attempt at presenting geological characteristics and evolution of the fold belts and the cratonic areas of the Indian shield. The author has evaluated the different evolutionary models for each fold belt in light of all the currently available geological and geochronological informations that are clearly listed. Shortcomings, if any, of each model are stated and a viable geodynamic model is presented for each fold belt. The book is self-contained--it includes an introduction to the processes of mountain building, especially plate tectonics theory with its application to the evolution of the Himalaya as an illustrative example—so that the reader can better appreciate the novel approach to the evolution of Proterozoic fold belts. The author eschews a detailed account of the fold belts for a clear description of all the concepts that go into building models. It is primarily written for graduate students, teachers and for those geoscientists who aspire to know all about the Indian shield.

Ram S. Sharma has a vast teaching experience at various universities of India and abroad. His research focus has been on metamorphic petrology and structural studies of Archaean terrains, Proterozoic fold belts and Himalaya. He has published over a hundred refereed works in more than thirty Journals. His geological experience includes field work in the classic areas of Lewisian and Highlands of Scotland, Tauern Window in Austrian Alps, Root zone of the Pennine Nappe (Swiss Alps), Adirondack (USA), Albany (Western Australia), Alden (Eastern Siberia), Central Crystallines of Higher Himalaya (India), Southern Granulite Terrain of India, as well as various other locations in Germany, Italy, France, and Greece. Professor Ram Sharma is a Fellow of the Indian Academy of Sciences (FASc.), Bangalore, and the Indian National Science Academy (FNA), New Delhi. Professor Sharma is presently an Honorary Scientist of the Indian National Science Academy.