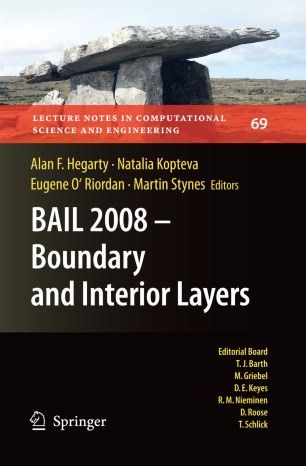 Proceedings of the International Conference on Boundary and Interior Layers - Computational and Asymptotic Methods, Limerick, July 2008

These Proceedings contain a selection of the lectures given at the conference BAIL 2008: Boundary and Interior Layers – Computational and Asymptotic Methods, which was held from 28th July to 1st August 2008 at the University of Limerick, Ireland. The ?rst three BAIL conferences (1980, 1982, 1984) were organised by Professor John Miller in Trinity College Dublin, Ireland. The next seven were held in Novosibirsk (1986), Shanghai (1988), Colorado (1992), Beijing (1994), Perth (2002),Toulouse(2004),and Got ¨ tingen(2006).With BAIL 2008the series returned to Ireland. BAIL 2010 is planned for Zaragoza. The BAIL conferences strive to bring together mathematicians and engineers whose research involves layer phenomena,as these two groups often pursue largely independent paths. BAIL 2008, at which both communities were well represented, succeeded in this regard. The lectures given were evenly divided between app- cations and theory, exposing all conference participants to a broad spectrum of research into problems exhibiting solutions with layers. The Proceedings give a good overview of current research into the theory, app- cation and solution (by both numerical and asymptotic methods) of problems that involve boundaryand interior layers. In addition to invited and contributed lectures, the conference included four mini-symposia devoted to stabilized ?nite element methods, asymptotic scaling of wall-bounded ?ows, systems of singularly p- turbed differential equations, and problems with industrial applications (supported by MACSI, the Mathematics Applications Consortium for Science and Industry). These titles exemplify the mix of interests among the participants.