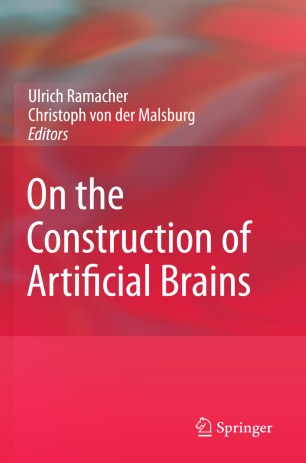 On the Construction of Artificial Brains

This book presents a first generation of artificial brains, using vision as sample application. An object recognition system is built, using neurons and synapses as exclusive building elements. The system contains a feature pyramid with 8 orientations and 5 resolution levels for 1000 objects and networks for binding of features into objects. This vision system can recognize objects robustly in the presence of changes in illumination, deformation, distance and pose (as long as object components remain visible).

The neuro-synaptic network owes its functional power to the introduction of rapidly modifiable dynamic synapses. These give a network greater pattern recognition capabilities than are achievable with fixed connections. The spatio-temporal correlation structure of patterns is captured by a single synaptic differential equation in a universal way. The correlation can appear as synchronous neural firing, which signals the presence of a feature in a robust way, or binds features into objects.

Although in this book we can present only a first generation artificial brain and believe many more generations will have to follow to reach the full power of the human brain, we nevertheless see a new era of computation on the horizon. There were times when computers, with their precision, reliability and blinding speed, were considered to be as superior to the wet matter of our brain as a jet plane is to a sparrow. These times seem to be over, given the fact that digital systems inspired by formal logic and controlled algorithmically - today's computers - are hitting a complexity crisis. A paradigm change is in the air: from the externally organised to the self-organised computer, of which the results described in this book may give an inkling.