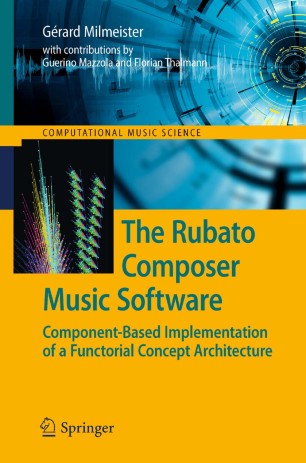 Both modern mathematical music theory and computer science are strongly influenced by the theory of categories and functors. One outcome of this research is the data format of denotators, which is based on set-valued presheaves over the category of modules and diaffine homomorphisms. The functorial approach of denotators deals with generalized points in the form of arrows and allows the construction of a universal concept architecture. This architecture is ideal for handling all aspects of music, especially for the analysis and composition of highly abstract musical works.

This book presents an introduction to the theory of module categories and the theory of denotators, as well as the design of a software system, called Rubato Composer, which is an implementation of the category-theoretic concept framework. The application is written in portable Java and relies on plug-in components, so-called rubettes, which may be combined in data flow networks for the generation and manipulation of denotators.

The Rubato Composer system is open to arbitrary extension and is freely available under the GPL license. It allows the developer to build specialized rubettes for tasks that are of interest to composers, who in turn combine them to create music. It equally serves music theorists, who use them to extract information from and manipulate musical structures. They may even develop new theories by experimenting with the many parameters that are at their disposal thanks to the increased flexibility of the functorial concept architecture.

Two contributed chapters by Guerino Mazzola and Florian Thalmann illustrate the application of the theory as well as the software in the development of compositional tools and the creation of a musical work with the help of the Rubato framework.