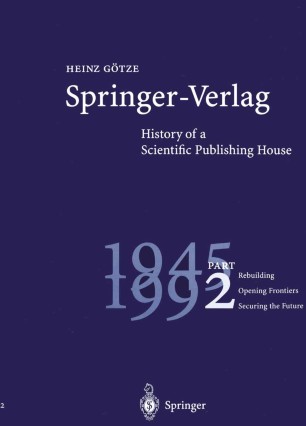 The second part of the history of Springer-Verlag covers the events from the new beginning following the Second World War until the change in company management at the end of 1992. It forms a unit with regard to both the work of the personalities who put their stamp on the company and their publishing policy. Two main periods are discernible: The first is the phase of reconstruction in Berlin, Heidelberg, Göttingen, Munich and Vienna. Here, the proven tradition of attention to quality of content and form was carried on. International expansion followed, beginning with the founding of a branch in New York in 1964. This was connected with the transition to the English language for a large portion of Springer's scientific books and journals. A further equally important step resulted from an early appreciation of the growing significance of East Asia. The acquisition of a distribution firm in 1978 was followed in 1983 by the commencement of the company's own publishing activity in Tokyo. Even earlier than this, activities had been developed in India with New Delhi as headquarters. In Hong Kong, which occupies a key position for contacts with China and South-East Asia, a branch was founded in 1986. The aim of all these undertakings was to establish a global presence for Springer-Verlag both in planning and selling scientific literature.