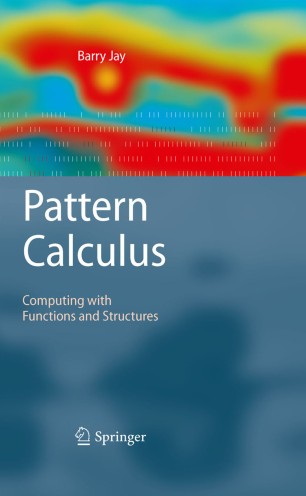 Computing with Functions and Structures

Over time, basic research tends to lead to specialization – increasingly narrow t- ics are addressed by increasingly focussed communities, publishing in increasingly con ned workshops and conferences, discussing increasingly incremental contri- tions. Already the community of programming languages is split into various s- communities addressing different aspects and paradigms (functional, imperative, relational, and object-oriented). Only a few people manage to maintain a broader view, and even fewer step back in order to gain an understanding about the basic principles, their interrelation, and their impact in a larger context. The pattern calculus is the result of a profound re-examination of a 50-year - velopment. It attempts to provide a unifying approach, bridging the gaps between different programming styles and paradigms according to a new slogan – compu- tion is pattern matching. It is the contribution of this book to systematically and elegantly present and evaluate the power of pattern matching as the guiding paradigm of programming. Patterns are dynamically generated, discovered, passed, applied, and automatically adapted, based on pattern matching and rewriting technology, which allows one to elegantly relate things as disparate as functions and data structures. Of course, pattern matching is not new. It underlies term rewriting – it is, for example, inc- porated in, typically functional, programming languages, like Standard ML – but it has never been pursued as the basis of a unifying framework for programming.