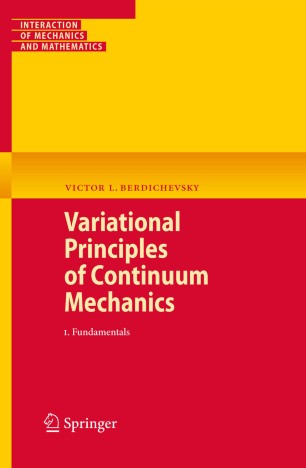 Part of the Interaction of Mechanics and Mathematics book series (IMM)

The book reviews the two features of the variational approach: its use as a universal tool to describe physical phenomena and as a source for qualitative and quantitative methods of studying particular problems.

Berdichevsky’s work differs from other books on the subject in focusing mostly on the physical origin of variational principles as well as establishing their interrelations. For example, the Gibbs principles appear as a consequence of the Einstein formula for thermodynamic fluctuations rather than as the first principles of the theory of thermodynamic equilibrium. Mathematical issues are considered as long as they shed light on the physical outcomes and/or provide a useful technique for the direct study of variational problems. In addition, a thorough account of variational principles discovered in various branches of continuum mechanics is given.