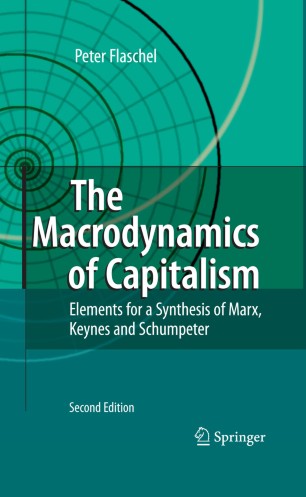 The Macrodynamics of Capitalism

Elements for a Synthesis of Marx, Keynes and Schumpeter

This book provides an introduction to basic as well as advanced macrodynamics, viewed as a disequilibrium theory of fluctuating growth. It builds on an earlier attempt to reformulate the foundations of macroeconomics from the perspective of real markets disequilibrium and the conflict over income distribution between capital and labor. It does so, not because it seeks to support the view that this class conflict is inevitable, but rather from the perspective that an understanding of this conflict may help to formulate social principles and policies that can help to overcome class conflict at least in its cruder forms. It is further hoped that such an understanding can even lead to rational procedures and rules that may turn this conflict into a consensus-driven interaction between capital and the employable workforce.

Peter Flaschel’s impressive book should help economists find their way back from the fanciful treatment of the economy as an omniscient, infallible person to the central task of macroeconomics:  to illuminate the forces that determine the growth and fluctuation of aggregate output, employment, and the general price level.
Richard Day, University of Southern California, Los Angeles, USA

This elegant book is a tour de force on the mathematical and conceptual underpinnings of a nonlinear, disequilibrium, macrodynamic theory of fluctuating growth with its pièce de résistance being the classic Goodwin growth cycle acting as a focal point for a consistent modelling of aggregate distributive variables. The author’s mathematical mastery of nonlinear dynamics is, by now, legendary; this book testifies to his deep knowledge of the doctrine-historical bases of the theories he is developing. The enlightened policies that a conjunction of masterly analysis and a sympathetic grasp of the unruly facts of aggregate variables in disequilibrium motion imply are enunciated with exceptional clarity and admirable conviction.
K. Vela Velupillai, University of Trento, Trento, Italy