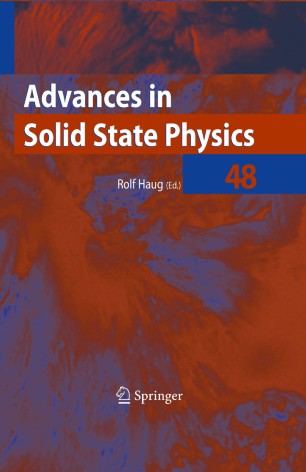 The present volume 48 of the Advances in Solid State Physics contains the written version of a large number of the invited talks of the 2008 Spring Meeting of the DPG section Condensed Matter Physics (Sektion kondensierte Materie der DPG) which was held in Berlin, Germany, and gives a nice overview of the present status of condensed matter physics. Low-dimensional systems are dominating the field and especially nanowires and quantum dots. In recent years one
learned how to produce nanowires directly during a growth process. Therefore, a number of articles is related to such nanowires. In nanoparticles and quantum dots, the dimensionality is further reduced and we learn more and more how to produce such systems in a defined way and what effects result from the confinement in all
three dimensions. Spin effects and magnetism is another important field of present-day research in solid state physics. The third chapter covers this physics. The growing interest into organic  materials and biological systems is reflected in a large chapter
of this book with the title Organic Materials and Water. The last chapters of this book cover aspects that range from dynamical effects up to device physics and characterization tools.

From the reviews: “This 48th volume of the Advances in Solid State Physics series contains the written version of many talks from the 2008 Spring Meeting of the Condensed Matter Conference held in Berlin. … includes remarkably lucid research presentations. … Research articles on nanowires, quantum dots, quantum wells and graphene form the core of the book. … I recommend this volume as a good place to start one’s education in low-dimensional systems … even advanced scholars would profit from pure enjoyment of the exposition.” (Christian Brosseau, Optics & Photonics News, September, 2009)
Buy options