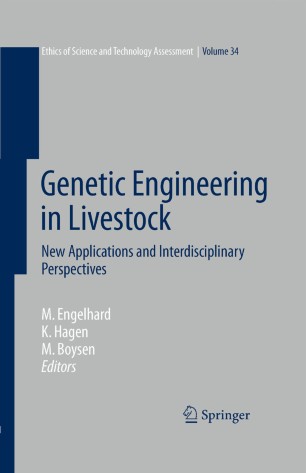 Part of the Ethics of Science and Technology Assessment book series (ETHICSSCI, volume 34)

Recently, the first "zoopharming" product has reached market approval: it is a recombinant human protein for medical use that is produced in the milk of transgenic goats. In addition, other transgenic animals, including faster-growing salmon and „environmentally friendly" pigs with reduced levels of phosphate in their faeces are awaiting regulatory approval. These are only some examples of upcoming applications of genetic engineering in farm animals. Other potential applications include traditional breeding goals such as higher milk or meat yields, leaner meat, and disease resistance. While genetic engineering in livestock opens a huge range of possibilities, it also brings about concerns of safety and justification: does genetic engineering affect animal welfare? Is it safe and morally acceptable to apply genetic engineering to farm animals for the various purposes that are envisaged?

It is against this background that the Europäische Akademie GmbH and the Berlin-Brandenburgische Akademie der Wissenschaften addressed the topic of transgenic farm animals in an interdisciplinary symposium in 2007. In these proceedings the following topics are covered: an analysis of the state of the art of the technology and its applications, an introduction to the specific application zoopharming (including its historical industrial development and the market for biopharmaceuticals), an assessment of ethical aspects, and considerations regarding the investigation of animal welfare implications of livestock biotechnology. The proceedings address science, industry, politics and the general public interested in the chances and risks of this upcoming field of biotechnology.