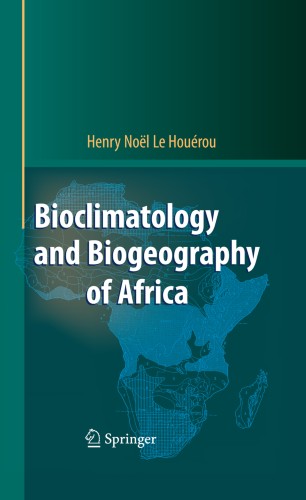 Bioclimatology and Biogeography of Africa

Covering an area of over 130 million km2 spanning the equator and tropics, the African continent features a spectacular geographic diversity. Consequently, it is characterised by extremely variable climatic, edaphic and ecological conditions, associated with a wide range of natural vegetation and wildlife, as well as human population density, crops and livestock.
In this book, Henry Le Houérou presents his bioclimatic and biogeographic classification of Africa. The extensive data provide the basis for comparisons between various African regions, and with regions on other continents such as Latin America or the Indian subcontinent. The results constitute a rational basis for national, regional and sub-regional rural development planning, and for agricultural research dealing with aspects such as plant and animal introductions, the extrapolation or interpolation of experimental or developmental findings, and ecosystems dynamics. Possible problems of applications are also examined.

Henry Le Houérou (Montpellier, France)
For his substantial contribution to the work of the Intergovernmental Panel on Climate Change (IPCC), he was awarded a share of the Nobel Peace Prize bestowed on the IPCC in 2007 (equally with Al Gore and others).