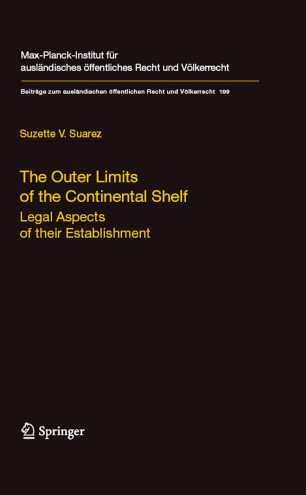 The Outer Limits of the Continental Shelf

Legal Aspects of their Establishment

A. The Outer Limits of the Continental Shelf The 1982 United Nations Convention on the Law of the Sea (herein- ter the “Convention”) marks the beginning of a new era in the law of 1 the sea. The negotiations for this treaty at the Third United Nations Conference for the Law of the Sea (hereinafter “UNCLOS III”), lasted for nine years, from 1973 to 1982. The Convention regulates the principal aspects of international oceans affairs. It establishes and fixes the limits of maritime zones, provides for the rights and duties of states in these zones, establishes the law app- cable in the international seabed area on the basis of the principle of common heritage of mankind, imposes obligations on states to protect the marine environment, and provides for the means of dispute sett- ment. One of the most contentious and divisive issues at UNCLOS III were the outer limits of the continental shelf. Previously, in the 1958 Con- 2 vention on the Continental Shelf (hereinafter the “1958 Convention”), no limits were established for the continental shelf. States were allowed to claim areas of continental shelves based on their capacity to exploit the mineral resources of the shelf. The legal framework in the 1958 Convention would obviously conflict with the principle of the common heritage of mankind. Delegates realized that limits have to be est- lished, but up to where and on the basis of which principles, was a c- tentious question.