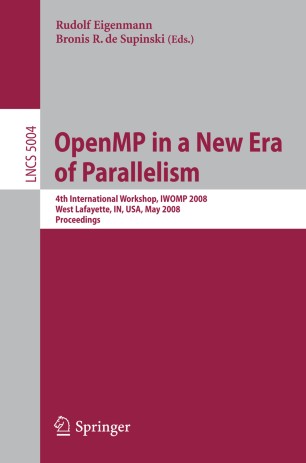 OpenMP in a New Era of Parallelism

OpenMP is a widely accepted, standard application programming interface (API) for high-level shared-memory parallel programming in Fortran, C, and C++. Since its introduction in 1997, OpenMP has gained support from most high-performance compiler and hardware vendors. Under the direction of the OpenMP Architecture Review Board (ARB), the OpenMP speci?cation has evolved, including the - cent release of Speci?cation 3. 0. Active research in OpenMP compilers, runtime systems, tools, and environments drives its evolution, including new features such as tasking. The community of OpenMP researchers and developers in academia and - dustry is united under cOMPunity (www. compunity. org). This organaization has held workshops on OpenMP around the world since 1999: the European Wo- shop on OpenMP (EWOMP), the North American Workshop on OpenMP App- cations and Tools (WOMPAT), and the Asian Workshop on OpenMP Experiences and Implementation (WOMPEI) attracted annual audiences from academia and industry. The International Workshop on OpenMP (IWOMP) consolidated these three workshop series into a single annual international event that rotates across the previous workshop sites. The ?rst IWOMP meeting was held in 2005, in - gene, Oregon, USA. IWOMP 2006 took place in Reims, France, and IWOMP 2007 in Beijing, China. Each workshop drew over 60 participants from research and - dustry throughout the world. IWOMP 2008 continued the series with technical papers, panels, tutorials, and OpenMP status reports. The ?rst IWOMP wo- shop was organized under the auspices of cOMPunity.