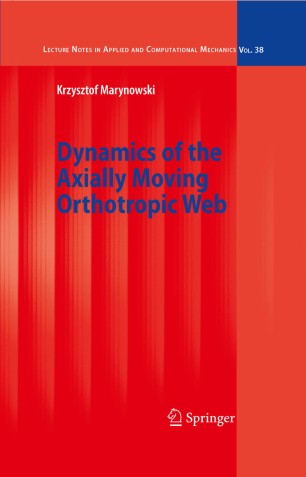 The book is concentrated with an analysis of the dynamic behaviour of axially moving orthotropic web. Axially moving materials are of technological importance and are present in various industrial applications. Power transmission belts, paper and plastic sheets in process, the steel strip in a thin steel sheet production line, the band saw blade are only some examples of two-dimensional continua, where vibrations are associated with an axial transport of mass. Generally, axially moving continuum in the form of thin, flat rectangular shape material with small flexural stiffness is called a web. Webs are moving at high speed, for example, in paper production the paper webs are transported with longitudinal speeds of up to 3000 m/min. Above the critical speed one can expect various dynamical instabilities mainly of divergent and flutter type. These instabilities can decrease the quality of products and their performance. The instability of band saw results in low surface quality, unsatisfactory cutting performance and leads to the loss of raw materials. In paper production, the machines instabilities, resonance oscillations and the flutter of the web can cause the wrinkling or even a breaking of the web. On the other hand one important problem in these systems is the occurrence of large transverse vibrations due to tension variations termed as parametric vibrations. Dynamic response and stability associated with parametric vibrations are of primary concern in the dynamic investigations of these systems. To ensure that the operating system is under stable working conditions, full analysis of its dynamics has to be performed. Complete knowledge of the dynamical behaviour allows the prediction and control of instabilities.

In the beginning part of this book the up-to-date state of knowledge in the field of dynamic behaviour of axially moving materials is presented. The first studies on this subject date in the middle of the twentieth century. Historically, the one-dimensional string theory, the beam theory, and the two-dimensional plate theory were successively used in modelling the axially moving continua. To avoid complications, a lot of earlier works for modelling of two-dimensional axially moving materials used the one-dimensional string or beam theory instead of the plate theory. Although this simplification leads to reasonable results in particular cases, the two-dimensional analysis is required for modelling of many problems such as composite materials, wide width plates, various forces across the width and etc. In the reference review the works from the last twenty years are mostly taken into account. The particular emphasis is paid on the role of nonlinearities in the dynamic behaviour of the travelling systems.

In the next part of the book a nonlinear mathematical model of the axially moving orthotropic web is derived. The non-linear orthotropic plate theory is modified to include the internal forces resulting from the moving web and internal damping of travelling material. The differential equations of motion are derived from the Hamilton’s principle taking into account the Lagrange description, the strain Green tensor for thin-walled plates and the Kirchhoff stress tensor. The mathematical model has the form of two non-linear partial differential equations which describe transverse motion of the web and the field of sectional forces

In the next part of the book the solutions of the mathematical model that show displacements and critical transport speeds of the web in equilibrium states of the linearized system are presented. Static analysis, by determination of the non-trivial equilibrium positions existence is used in investigations of stability of the web motion. Equations of equilibrium positions of axially moving web with uniform motion are derived. Transverse displacements and wrinkling of the webs of two kinds of papers and the corrugated board constructed with these papers are numerically investigated.

The investigation results of stability of the non-linear system motion are presented in the final part of the book. The Galerkin method is used to discretize the governing equations of motions and a high dimensional system of ordinary differential equations is obtained. The dynamic behaviour is studied in the sub- and super-critical speed ranges of the web. Three different rheological model of internal damping are taken into consideration in the dynamic studies of the beam model of the traveling web.

Important features of the book