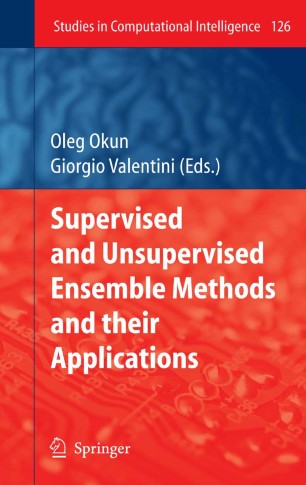 Supervised and Unsupervised Ensemble Methods and their Applications

This book was inspired by the last argument and resulted from the workshop on Supervised and Unsupervised Ensemble Methods and their Applications (briefly, SUEMA) organized on June 4, 2007 in Girona, Spain. This workshop was held in conjunction with the 3rd Iberian Conference on Pattern Recognition and Image  Analysis and was intended to encompass the progress in the ensemble applications made by the Iberian and international scholars. Despite its small format, SUEMA attracted researchers from Spain, Portugal, France, USA, Italy, and Finland, who presented interesting ideas about using the ensembles in various practical cases. Encouraged by this enthusiastic reply, we decided to publish workshop papers in an edited book, since CD proceedings were the only media distributed among the workshop participants at that time. The book includes nine chapters divided into two parts, assembling contributions to the applications of supervised and unsupervised ensembles.

The book is intended to be primarily a reference work. It could be a good complement to two excellent books on ensemble methodology – “Combining pattern classifiers: methods and algorithms” by Ludmila Kuncheva (John Wiley & Sons, 2004) and “Decomposition methodology for knowledge discovery and data mining: theory and applications” by Oded Maimon and Lior Rokach (World Scientific, 2005).