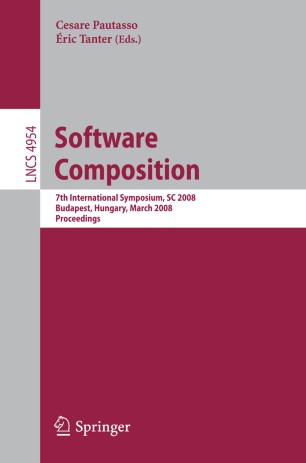 The goal of the International Symposia on Software Composition is to advance the state of the research in component-based software development. We focus on the challenges related to component development, reuse, veri?cation and, of course,composition.Softwarecompositionisbecomingmoreandmoreimportant as innovation in software engineering shifts from the development of individual components to their reuse and recombination in novel ways. To this end, for the 2008 edition, researchers were solicited to contribute on topics related to component adaptation techniques, composition languages, calculi and type systems, as well as emerging composition techniques such as aspect-oriented programming, service-oriented architectures, and mashups. In line with previous editions of SC, contributions were sought focusing on both theory and practice, with a particular interest in e?orts relating them. This LNCS volume contains the proceedings of the 7th International S- posium on Software Composition, which was held on March 29–30, 2008, as a satellite event of the European Joint Conferences on Theory and Practice of Software (ETAPS), in Budapest, Hungary. We received 90 initial submissions from all over the world, out of which 70 were considered for evaluation by a Program Committee consisting of 30 - ternational experts. Among these submissions, we selected 13 long papers and 6 short papers to be included in the proceedings and presented at the conf- ence. Each paper went through a thoroughrevisionprocess and was reviewedby three to ?ve reviewers. This ensured the necessary quality for publishing these proceedings in time for the event, a ?rst in the history of the symposium.