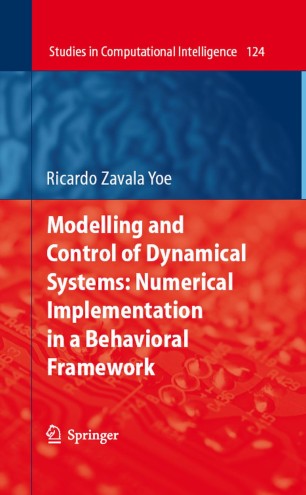 Modelling and Control of Dynamical Systems: Numerical Implementation in a Behavioral Framework

A paradigmatic perspective for modeling and control of physical systems has been used since a long time ago: The input/output approach. Although quite natural for our human experience, this perspective imposes a cause/effect framework to the system under study although such system may not have necessarily such cause/effect structure. Actually, from a general point of view, a system interacts with its environment by exchange of mass and energy which should imply the use of bidirectional arrows in a block diagram rather than using unidirectional ones. Another perspective arose when a new variable showed up in systems and control theory: the state (Kalman). Thus, the input/state/output approach was born. Although the concept of state is cornerstone, qualitative characteristics of a system (stability, controllability and observability) have to be defined in terms of a representation of the system, i.e., such characteristics become representation dependent. In contrast, the relatively new Behavioral Approach for systems and control (Jan C. Willems) deals directly with the solution of the differential equations which represent the system. This set of allowed solutions is referred to as the behavior of the system. Thus, the key is the behavior and not the representation. This fact makes this perspective a representation free approach.

This book reviews known topics of the Behavioral Approach and offers new theoretic results with the advantage of including control algorithms implemented numerically in the computer. In addition, issues of numerical analysis are also included. The programs and algorithms are MATLAB based.