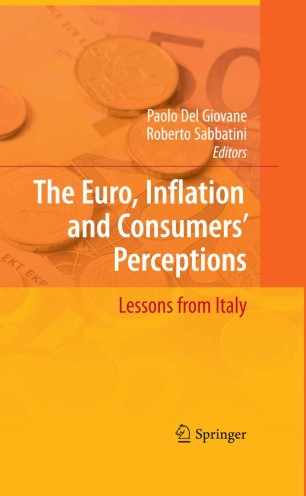 The Euro, Inflation and Consumer’s Perceptions

On 1 January 2002, euro banknotes and coins were introduced in twelve EU Member States. Three more countries joined in the following years, and over 300 million people now use the euro in their daily transactions. The currency changeover was a technical success. From the very start, however, the vast majority of euro area citizens held the single currency responsible for a sharp rise in prices and a subsequent decline in their personal economic fortunes.

This book puts forward convincing empirical evidence, primarily drawn from Italy’s experience, to establish whether the introduction of the euro has had a major impact on prices, and if not, why so many people believe it has. Its significance lies not only in the documentation of a historic event, but also and more importantly, in the lessons it provides, which concern the public’s understanding of inflation, the correct assessment of the effects of the single currency, and the need for appropriate measures when other countries adopt the euro.

The editors are economists atthe Economic Outlook and Monetary Policy Department of the Bank of Italy.

Paolo Del Giovane is Head of the Monetary Analysis Division. His areas of interest include the European monetary unification process and the setting of monetary policy, its conduct and communication; more recently, his research has centred around price recall and the determinants of inflation perceptions.

Roberto Sabbatini is Deputy Head of the Economic Outlook Division. Lately, his research has focused on the inflationary process and its determinants, in particular its persistence in the euro area, the impact of the transition to the single currency, and the development of housing market indicators.