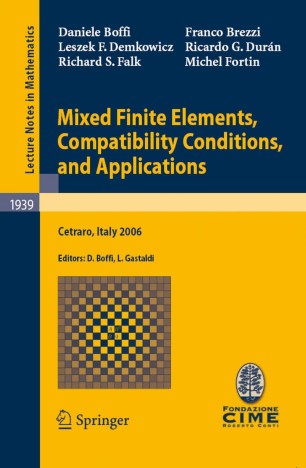 Since the early 70's, mixed finite elements have been the object of a wide and deep study by the mathematical and engineering communities. The fundamental role of this method for many application fields has been worldwide recognized and its use has been introduced in several commercial codes. An important feature of mixed finite elements is the interplay between theory and application. Discretization spaces for mixed schemes require suitable compatibilities, so that simple minded approximations generally do not work and the design of appropriate stabilizations gives rise to challenging mathematical problems.

This volume collects the lecture notes of a C.I.M.E. course held in Summer 2006, when some of the most world recognized experts in the field reviewed the rigorous setting of mixed finite elements and revisited it after more than 30 years of practice. Applications, in this volume, range from traditional ones, like fluid-dynamics or elasticity, to more recent and active fields, like electromagnetism.