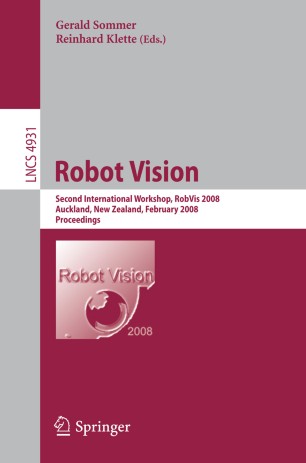 In 1986, B.K.P. Horn published a book entitled Robot Vision, which actually discussed a wider ?eld of subjects, basically addressing the ?eld of computer vision, but introducing “robot vision” as a technical term. Since then, the - teraction between computer vision and research on mobile systems (often called “robots”, e.g., in an industrial context, but also including vehicles, such as cars, wheelchairs, tower cranes, and so forth) established a diverse area of research, today known as robot vision. Robot vision (or, more general, robotics) is a fast-growing discipline, already taught as a dedicated teaching program at university level. The term “robot vision” addresses any autonomous behavior of a technical system supported by visual sensoric information. While robot vision focusses on the vision process, visual robotics is more directed toward control and automatization. In practice, however, both ?elds strongly interact. Robot Vision 2008 was the second international workshop, counting a 2001 workshop with identical name as the ?rst in this series. Both workshops were organized in close cooperation between researchers from New Zealand and Germany, and took place at The University of Auckland, New Zealand. Participants of the 2008 workshop came from Europe, USA, South America, the Middle East, the Far East, Australia, and of course from New Zealand.