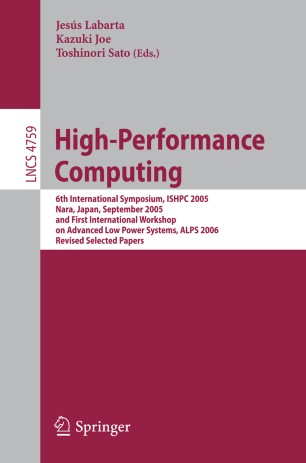 This is the joint post-proceedings of the 6th International Symposium on High Performance Computing (ISHPC-VI) and the First International Workshop on Advanced Low Power Systems 2006 (ALPS2006). The post-proceedings also contain the papers presented at the Second HPF International Workshop: - periences and Progress (HiWEP2005) and the Workshop on Applications for PetaFLOPS Computing (APC2005), which are workshops of ISHPC-VI. ISHPC-VI, HiWEP2005 and APC2005 were held in Nara, Japan during September 7–9, 2005. Fifty-eight papers from 11 countries were submitted to ISHPC-VI. After the reviews of the submitted papers, the ISHPC-VI Program Committee selected 15 regular (12-page) papers for oral presentation. In ad- tion, several other papers with favorable reviews were recommended for poster presentation, and 14 short (8-page) papers were also selected. Twenty-eight papers out of 29 ISHPC-VI papers are contained in the post-proceedings. Hi- WEP2005 and APC2005 received eight and ten submissions, with six and eight papers being accepted for oral presentation after reviews, respectively. All the HiWEP2005 and APC2005 papers are included in the post-proceedings. ALPS2006 was held in Cairns, Australia on July 1, 2006 in conjunction with the ACM 20th International Conference on Supercomputing. The number of submitted papers was 15, and eight papers were accepted for oral presentation. The post-proceedings contain six of the eight papers.