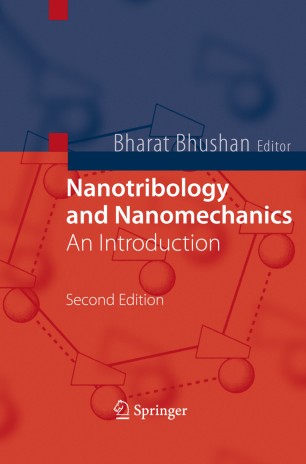 This volume serves as a timely, practical introduction to the principles of nanotribology and nanomechanics and applications to magnetic storage systems, MEMS/NEMS and BioMEMS/bioNEMS. Assuming some familiarity with macrotribology/mechanics, the book comprises chapters by internationally recognized experts, who integrate knowledge of the field from the mechanics and materials-science perspectives. They cover key measurement techniques, their applications, and theoretical modelling of interfaces, each beginning their contributions with macro- and progressing to microconcepts. After reviewing the fundamental experimental and theoretical aspects in the first part, Nanotribology and Nanomechanics then treats applications.

Three groups of readers are likely to find this text valuable: graduate students, research workers, and practicing engineers. It can serve as the basis for a comprehensive, one- or two-semester course in scanning probe microscopy; applied scanning probe techniques; or nanotribology/nanomechanics/nanotechnology, in departments such as mechanical engineering, materials science, and applied physics.

This second, revised edition is substantially enlarged by three new chapters: One new chapter introduces to the theory, physics and characterization of the Lotus-Effect. Other new chapters discuss the attaching properties of hairs as realized at gecko feet and present a comprehensive review of structural, mechanical, and tribological properties of various hair and skin as a function of ethnicity, damage, conditioning treatment, and various environments.

With a Foreword by Physics Nobel Laureate Gerd Binnig

Dr. Bharat Bhushan is an Ohio Eminent Scholar and The Howard D. Winbigler Professor in the Department of Mechanical Engineering, Graduate Research Faculty Advisor in the Department of Materials Science and Engineering, and the Director of the Nanotribology Laboratory for Information Storage & MEMS/NEMS (NLIM) at the Ohio State University, Columbus, Ohio. He is an internationally recognized expert of tribology and mechanics on the macro- to nanoscales, and is one of the most prolific authors. He is considered by some a pioneer of the tribology and mechanics of magnetic storage devices and a leading researcher in the fields of nanotribology and nanomechanics using scanning probe microscopy and applications to micro/nanotechnology.

He is the recipient of various international fellowships including the Alexander von Humboldt Research Prize for Senior Scientists, Max Planck Foundation Research Award for Outstanding Foreign Scientists, and the Fulbright Senior Scholar Award.