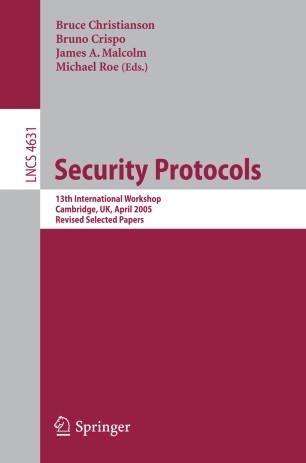 Welcome to the Proceedings of the 13th International Security Protocols Wo- shop. As usual, our meeting in Cambridge was just the beginning. After that, position papers were revised (often more than once) and transcripts were c- culated, discussed, and edited several times: our intention was not to produce a sterile record of who said what, but to share some promising lines of enquiry into interesting problems. Now we bring these proceedings to a wider audience so that you can join in. Our theme this time was “The systemlikes youandwants to be yourfriend.” Security is usually seen as making systems more di?cult for humans to use. Might there be advantages to looking at security in the context of more general design problems? Perhaps those investigating the general properties of system design and those of us in the security community have more to say to each other than we thought. Our thanks to Sidney Sussex CollegeCambridgefor the use of their facilities, and to the University of Hertfordshire for lending us several of their sta?. Particular thanks to Johanna Hunt of the University of Hertfordshire for being our impresario and organizing everything, and to Lori Klimaszewska of the University of CambridgeComputing Service for transcribing the audio tapes (in which the “crash barriers” nearly prevented collisions). The Security Protocols Workshop exists because you, the audience, part- ipate. Once you have dived into these proceedings and have had some Eleatic thoughts, we expect to hear from you.