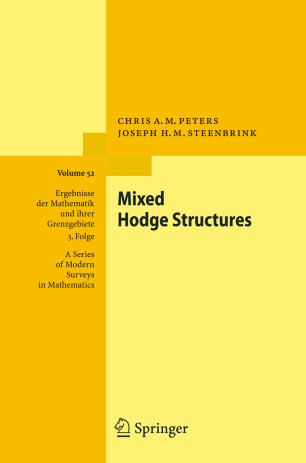 The text of this book has its origins more than twenty- ve years ago. In the seminar of the Dutch Singularity Theory project in 1982 and 1983, the second-named author gave a series of lectures on Mixed Hodge Structures and Singularities, accompanied by a set of hand-written notes. The publication of these notes was prevented by a revolution in the subject due to Morihiko Saito: the introduction of the theory of Mixed Hodge Modules around 1985. Understanding this theory was at the same time of great importance and very hard, due to the fact that it uni es many di erent theories which are quite complicated themselves: algebraic D-modules and perverse sheaves. The present book intends to provide a comprehensive text about Mixed Hodge Theory with a view towards Mixed Hodge Modules. The approach to Hodge theory for singular spaces is due to Navarro and his collaborators, whose results provide stronger vanishing results than Deligne’s original theory. Navarro and Guill en also lled a gap in the proof that the weight ltration on the nearby cohomology is the right one. In that sense the present book corrects and completes the second-named author’s thesis.