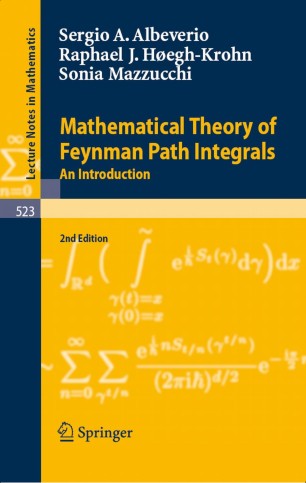 Feynman path integrals, suggested heuristically by Feynman in the 40s, have become the basis of much of contemporary physics, from non-relativistic quantum mechanics to quantum fields, including gauge fields, gravitation, cosmology. Recently ideas based on Feynman path integrals have also played an important role in areas of mathematics like low-dimensional topology and differential geometry, algebraic geometry, infinite-dimensional analysis and geometry, and number theory.

The 2nd edition of LNM 523 is based on the two first authors' mathematical approach of this theory presented in its 1st edition in 1976. To take care of the many developments since then, an entire new chapter on the current forefront of research has been added. Except for this new chapter and the correction of a few misprints, the basic material and presentation of the first edition has been maintained. At the end of each chapter the reader will also find notes with further bibliographical information.