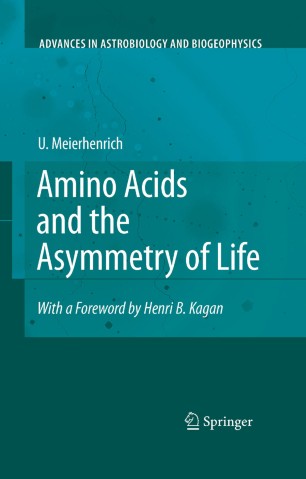 Amino Acids and the Asymmetry of Life

Caught in the Act of Formation

Part of the Advances in Astrobiology and Biogeophysics book series (ASTROBIO)

"How did life originate and why were left-handed molecules selected for its architecture?" This question of high public and interdisciplinary scientific interest is the central theme of this book. It is widely known that in processes triggering the origin of life on Earth, the equal occurrence, the parity between left-handed amino acids and their right-handed mirror images, was violated. The balance is inevitably tipped to the left – provoking that life’s proteins today exclusively implement the left form of amino acids.
Written in an intoxicating style, this book describes how the basic building blocks of life, the amino acids, formed. After a comprehensible introduction into stereochemistry, the author addresses the inherent property of amino acids in living organisms, namely the preference for left-handedness. What was the cause for violation of parity of amino acids in the emergence of life on Earth? All the fascinating models proposed by physicists, chemists and biologist are vividly presented including the scientific conflicts. The author describes the attempt to verify any of those models with the chirality module of the ROSETTA mission, a probe built and launched with the mission to land on a comet and analyse whether there are chiral organic compounds that could have been brought to the Earth by cometary impacts.
A truly interdisciplinary astrobiology book, "Amino Acids and the Asymmetry of Life", will fascinate students, researchers and all readers with backgrounds in natural sciences..

With a foreword by Henri B. Kagan.