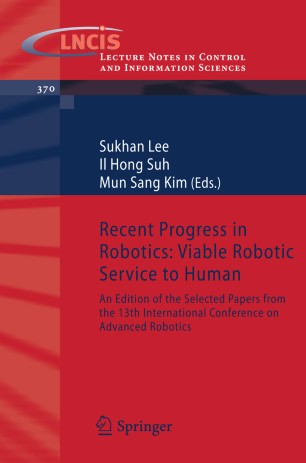 th This volume is an edition of the papers selected from the 13 International Conference on Advanced Robotics, ICAR 2007, held in Jeju, Korea, August 22-25, 2007, with the theme: “Viable Robotics Service to Human. ” It is intended to deliver readers the most recent technical progress in robotics, in particular, toward the advancement of robotic service to human. To ensure its quality, this volume took only 28 papers out of the 214 papers accepted for publication for ICAR 2007. The selection was based mainly on the technical merit, but also took into consideration whether the subject represents a theme of current interest. For the final inclusion, authors of the selected papers were requested for another round of revision and expansion. In this volume, we organize the 28 contributions into three chapters. Chapter 1 covers Novel Mechanisms, Chapter 2 deals with perception guided navigation and manipulation, and Chapter 3 addresses human-robot interaction and intelligence. Chapters 1, 2 and 3 consist of 7, 13 and 8 contributions, respectively. For the sake of clarity, Chapter 2 is divided further into two parts with Part 1 for Perception Guided Navigation and Part 2 for Perception Guided Manipulation. Chapter 3 is also divided into two parts with Part 1 for Human- Robot Interaction and Part 2 for Intelligence. For the convenience of readers, a ch- ter summary is introduced as an overview in the beginning of each chapter. The chapter summaries were prepared by Dr. Munsang Kim for Chapter 1, Prof.